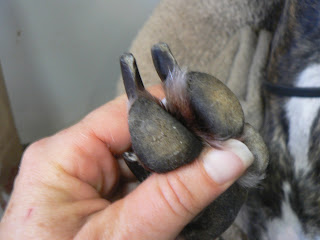 Pad corns are painful, hard, round, raised areas on the bottom of their feet. They can affect single or multiple toes. They are seen almost exclusively in the greyhound breed. No one knows for sure why they form but most seem to cause big problems. I have heard  several theories as to what causes them to form-a viral infection, a foreign body like a splinter in the pad or a more recent theory-lack of a fat pad adjacent to the toe bone. Whatever the cause it makes walking on hard surfaces painful for the dog and tremendously affects their quality of life.

Recently I have had my third experience with pad corns. All of them have been after bandaging the foot post operatively for over a month. Echo had a chip fracture of one of her toe bones and a stretched ligament. She was put in a splint for 4 weeks and the injury healed well. Unfortunately when she came out of the splint she had a pad corn coming through the bottom of the pad.

Her father Merlin also had a pad corn develop after prolonged bandaging post op. I had it removed surgically and it came back bigger than ever. I eventually had his toe removed and that was the end of the problem. But I was lucky he never developed another pad corn.

Echo's mother Lyric developed multiple pad corns also after prolonged post op bandaging. After researching I "hulled" the corn and then placed Vit E and later Tea Tree oil to the base. I had to do this weekly to keep her sound. One day I noticed two more corns starting on the adjacent toe and shortly after that another corn popped up in another toe, all on the same foot. I was getting discouraged by this time and a friend suggest using duct tape on the corns. Rather than hulling/applying ointment etc to them I simply placed tape over the new ones again and again as the tape fell off. Suprisingly they disappeared in a short time. The first one took the longest to heal and I wondered if it was because of all the trauma it went through. It too disappeared some months later and never returned. In fact she competed in agility and earned her Excellent Jumpers and Excellent Standard after the corns resolved. 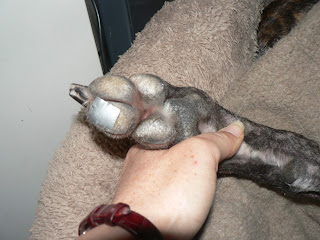 So when I saw a corn develop on Echo I only used the duct tape trick. Within weeks it was nonvisable and she too remains sound. 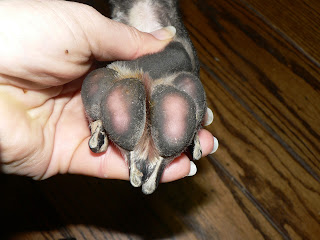 I have learned with my dogs the longer they have the pad corn and the more that is done to it,  the longer it will take to resolve. I am a big believer now in duct tape!!!

Posted by Aragon greyhounds at 8:35 PM

I will have to try that if we ever end up with corns, but so far, we've been very lucky!

They say duct tape works on human warts, but I couldn't get the tape to stay on :/

Very interesting. I've always wondered if all greyhounds got corns or if it was mainly ex-racers. Luckily we've not had any, but I now know to use the duct tape. :-)

Thank you so much for sharing this wonderful tip with all us greyhound lovers.!

Ya know...the corns sound just like the way a sarcoid acts. If you don't remove EVERY cell of the sarcoid, it will come back, with a vengence. We are treating some INSIDE a donkey and are having good success with using a couple pieces of the original sarcoid, frozen with liquid nitrogen, and inserted in little pockets made in his skin on his neck. Essentially a "vaccine" of his own sarcoid.

I will remember the duct tape method though and inspect "Creel's" toes tonight! Thanks!

I hope I never have to deal with corns.... but will remember duct tape if I do!

Very informative & useful. Thanks for the post.
skin clinic in Bangalore

Hello, I want to have one of these piercing models, but I am unsure. Can you look at it?