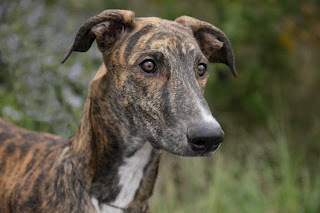 Riser is  now 2 years old and a new Champion and has his JC. But he is definitely still a PUPPY. His  two main pastimes are sleeping and running through the backyard corn and through the peach tree branches.  Of course, Bryn is right behind him!!!!
Bryn and Riser ran a fun lure course of about 200 yds at the Ferndale show and I am still hearing about the greyhounds that ran that night. People with other breeds don’t get the opportunity to see them run as nature intended.
He gets a lot of attention at the shows due to his red brindle coloring and very glossy coat and, of course, his height. He is quite tall and so his other name is “legs”.
As for the sleeping, he waits patiently until I am in bed and then proceeds to bring his night time toy to bed and lays his head on my shoulder and goes to sleep. Fortunately, when he gets hot, he  moves to the foot of the bed.  What a relief !!
He is the most loving greyhound of all my greys.  He seems to think it is his job to keep everyone in shape. That certainly includes me.
We love him and thank Helen and Whisper and Brego for the opportunity to enjoy him
Tom and Marie 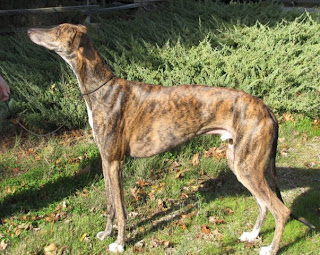 Posted by Aragon greyhounds at 10:02 AM 2 comments: 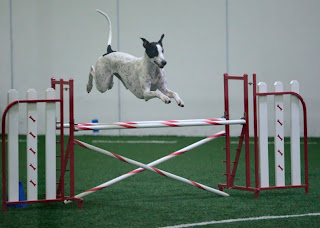 Last weekend was a bittersweet weekend. Sad because it was to be Whisper return to agility but health issues dictated otherwise and she is retired. When I am able I will post about it. Happy because Breeze had so much fun and did so well. 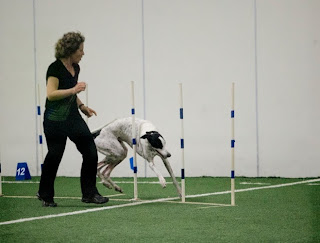 She runs much like her mother responsive, fast, furious and incredibly fun to watch. In this photo of the weavepoles taken by Costa Colbert she has no feet on the ground. She charges through weavepoles although gettting entrances is dicey at this point. Once in she powers through them.
Her first run ever in competition was the Novice Jumpers. She was fast and even with the weavepole entrance mistake was still 15 seconds under course time.

Her second run of the day was Novice Standard. Although  she didn't qualify as she knocked a bar, I was so proud of her. Her contacts were all I could ask, she held them until released. Holding contacts was always a problem with Whisper and when we NQed it would frequently be on missed contacts. Breeze was very very responsive to anything I asked of her.

The next day she qualified in both Jumpers and Standard. In fact I think the last run of the weekend, the standard was the fastest(30 seconds under course time)  and most fun as she was starting to get her confidence up.


All in all a great way to start an agility career!
Posted by Aragon greyhounds at 7:56 PM 6 comments: 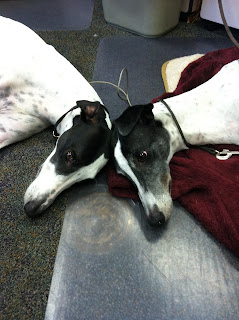 Breeze and Whisper patiently wait at work for the day to be done. They are two peas in a pod!