My friend Kathy and I have been training all season trying to get our young dogs ready for a TD test. To first enter a test a dog has to "certify" that is run a TD type track under a licensed judge. Once they show they can run a track they are approved to enter a tracking test. To earn a TD the dog has to run a 450-500 yard long track between 1/2 hr-2 hrs old and indicate the end article. 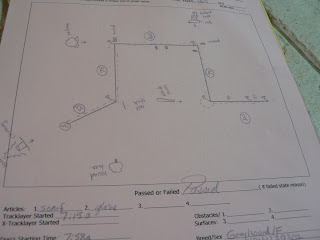 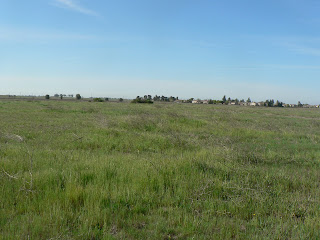 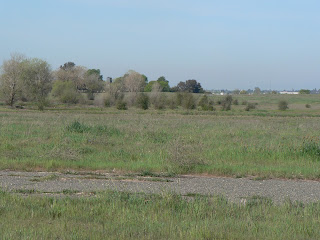 The dog and handler team wait until the track has aged enough and then the team is lead out into the field to their start flags. 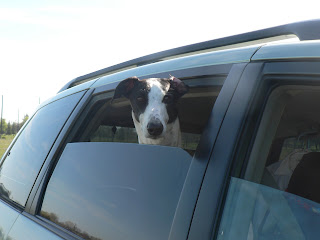 Going up to the start line is a little scary. It is just you and your dog and you have to totally trust them to be right. The spectators generally quietly watch from cars as the team starts. 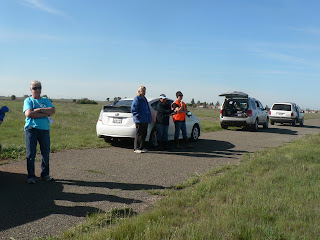 In a TD test there are two directional flags which indicate which way the track begins. After leaving the second directional flag the track can go anywhere. Breeze and I started off well but we got sidetracked by a dead mouse at the first turn. She veered off to investigate and then try to eat it. Luckily she called off  and went back to tracking although a little reluctantly. Down the second leg of the track we went and navigated several turns successfully. On the fourth and last turn she indicated loss of track by lifting her head and circling.This is a common tracking behavior and the handler has to just let the dog find and commit to the new track direction. All would have been easy except I saw a trampled path that looked like a freeway to my immediate left but she turned to the right and started going in that direction. I looked again to the left and asked her in my mind BREEZE ARE YOU SURE IT GOES THAT DIRECTION because I am seeing the track the other way. She was in her tracking style so I thought/hoped/prayed she was right and followed her. Fifty five feet later she told me she was right by finding the glove and we passed.

The entire track only took 9 minutes to run. What do I remember most about the track? The sunshine on the fields, the meadow larks singing and watching my dog work doing something she found so enjoyable. I think that is what keeps me tracking. 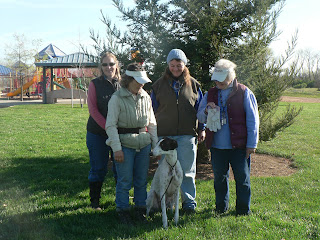 Tanner made his obedience debut this weekend in Beginner Novice. This class is a blend of traditional obedience exercises and Rally exercises. 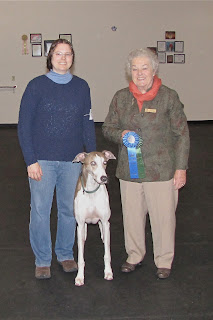 Not only did he qualify with a nice score of 197.5 but he won his class. 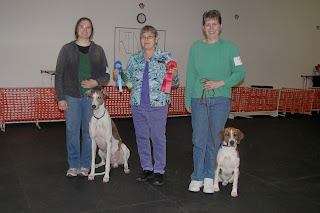 On the second day he again won his class with a 194 for his second leg.

One more leg and he has earned his BN(Beginner Novice).
Way to go Tamara and Tanner 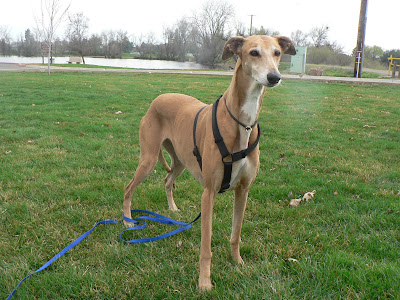 Yes, you read that right! Lyric just earned her TDX on her first attempt!

Tracking is like no other sport. You have to totally trust that your dog is right, especially in a TDX test. Often most or all of the track is invisible. Lyric's track was hard, it was beyond hard, but she stuck with it and 44 minutes later found her last article and earned the right to put Tracking Dog Excellent or TDX after her name.

For a TDX test the track is at least 3 hours and 800-1000 yds long. Multiple obstacles are included such as road crossings, water crossing, down trees etc. anything the judges can find to confuse or change the scent. There must be at least 5- 7 turns throughout the track. In addition, the track has 2 sets of "cross tracks".  These are laid by a different person than the track layer and have less age than the main track. The dog must stay on the original scent and not be drawn off to the easier track. The dog has to find and indicate four articles including the start and finish articles.


Tracking trials are unique because there are a limited number of tracks.  A random draw is conducted from all entries received by the deadline to see who gets in. Lyric's test offered 5 tracks with 10 entries. Luckily she was one of the 5. Then the day of the test a second draw is done to determine run order. Davis Dog Training Club had Easter socks stuffed with malted milk Easter eggs and a number to determine which track the dog would run. 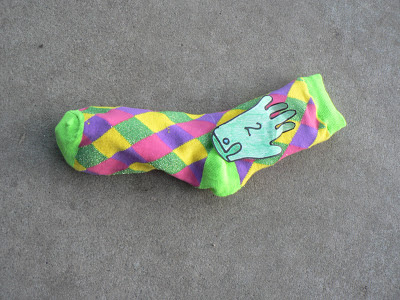 Luckily she drew an early track as it warms up later in the day and makes tracking harder for the dog/handler team.

She went out at 10 AM and started easily albeit slowly. The ground was dry with poor vegetation and a 5-10 mile an hour wind.  This was probably the worst test conditions I have seen in all the years I have been tracking. Trouble struck after Lyric indicated the second article. She started down the track and then lost the scent. She circled and circled trying to find the track for a good 10-15 minutes. Many dogs would have given up at this point but Lyric prevailed. Once she found the scent she pulled into the harness and started down the track. I thought we were in the clear but trouble quickly struck again. A turn was placed on an area of little vegetation and she overshot the turn and kept going. She crossed a road into the next field but couldn't pick up the scent so came back to me. We backed up and backed up while she looked (or sniffed) for the track and she finally found the turn. Off we went again through fields across roads and everything along the way. She passed both sets of cross tracks with little hesitation, found all the articles and picked them up for me to see-and earned her TDX!

Below is posed picture that demonstrates the sight of Lyric bringing me the last article on the track. What the picture does not convey is the leap of joy I felt in my heart when I saw this on the track. Lyric is such a dependable dog who always comes through when the pressure is on.  I am very lucky to have such a wonderful dependable dog on the other end of my tracking lead!

Thank you judges Roy Fair and Mitzi Young and tracklayer Cherrie Brown for plotting and laying such a challenging yet doable track.
Posted by Aragon greyhounds at 7:15 PM 8 comments: