Despite the Blazing Southern California heat in the triple digit range, Becca went Best of Breed at the Burbank All-Breed Kennel Club show on September 26, earning her first championship point!!! She was her usual happy, “let’s play”, confident self and showed well for Donna. Even though she didn’t place in the Hound Group, she had so much fun playing with the tail of the Deerhound in front of her while waiting her turn to gait around the ring. 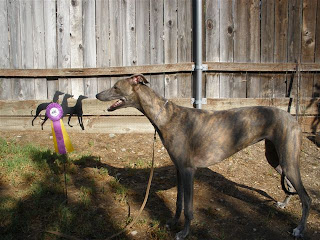 Becca’s obedience graduation is in a couple of weeks. Depending upon how she performs, she could be moving up to the advanced class. She’s quick learner and seems to enjoy herself. She’s shown here relaxing after her win. 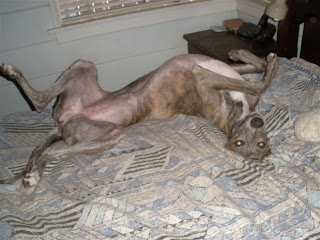 Combo Weekend of Highs and Lows

This past weekend was the Sir Francis Drake Kennel Club shows. They are a combination of conformation and agility shows.

Whisper was entered both days in agility in Excellent B Jumpers and Standard for Mach points. Lyric, Echo and Sterling were entered in the conformation shows.

I got to the shows very early perhaps too early?-before Sun up-oops miscalculated the times.Stumbled around in the dark a lot until the sun came up and I could see. At least I got great parking! It was on and off raining-a rarity in California this time of year. Footing was iffy and in fact a lady running her Beagle slid and fell, breaking her ankle. The ambulance folks came and took her away. Not a good omen!

In fact we did not qualify in either agility run. Although the courses seemed simple, errors occurred and we did not shine (nor did the sun).

In conformation Echo did not shine either. In fact, she placed last in her class!! Big Bummer. Lyric won breed but did nothing in the groups.

The bright spot of the day was that Sterling went Winners dog and Best of Winners for his second major! To top it off, he was also awarded Puppy Group 1! Congrats to Lisa and Sterling!

Sunday at least I got to the show after the sun was up. In Jumpers (agility) we again had some silly mistake. They were either Whisper's or mine, I don’t know. I was getting discouraged at this point. The last run of the day was in Standard. We did slightly better and qualified with a second place and 18 MACH points. Our first points towards to the massive goal of 750 pts for a MACH! We also need to double qualify (qualify in both jumpers and standard on the same day) but we will need to do that 20 times to earn Whisper's MACH. Yikes this MACH thing is going to be harder to accomplish than I thought.

We got our run on video. Why is it that one always thinks they handle better than in fact they do. Maybe my handling wasn’t top notch because I was wearing conformation show clothes and was confused? Okay, maybe not. We just need to keep going to class and keep working.

In conformation Echo beat her mother for the breed. I knew it was bound to happen sooner or later but I thought it would be later. To have a 9 month puppy beat a top special is unusual to say the least. Echo is quickly closing in her first title-breed Championship.
Posted by Tarmar at 6:36 AM 1 comment:

Crime and Punishment (but mostly crime) 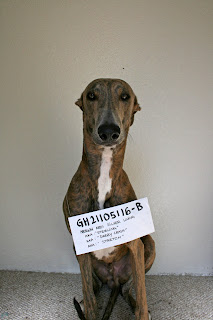 Most greyhound puppies are only transiently “chewy” on inappropriate objects. They quickly learn to leave things alone and chew only on their toys. Not so with Lyric’s litter-I have never had such a mouthy litter. Certainly it didn’t come from Lyric, as a puppy she ate maybe 2 leather leashes in half and that was it. She was trustworthy almost from the get go and by 4-5 months could be trusted absolutely. Merlin was similar-rarely chewed anything wrong. Of course when I had Merlin I lived on a farm and he ran almost constantly. Maybe he was too tired as a puppy to do wrong things.

Back to the litter from H……..I think Echo is in the lead-almost can’t keep things out of her mouth. I kept thinking as she got older she would outgrow it. Well so far-not so with any of the puppies. The girls are certainly much worse than the boys as you can tell by their list of chew toys(transgressions?).

I realize after reading through this list it might be tempting to think “well duh that is an easy fix, just kept the puppies away from objects”. All the puppies from Lyric’s litter are in experienced greyhound homes and are closely monitored. However, it only takes a second and some of these puppies have developed an unusual sense of stealth!

So onto their crimes. 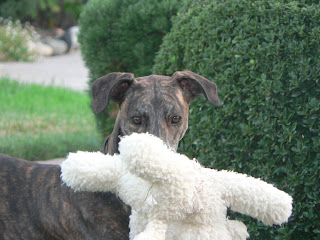 I have had greyhound puppies since 1983 so know how to monitor them. Echo is unusual to say the least in her chewing ability. I keep thinking it is going to ease up but instead she gets worse. She can be the sweetest dog and then turn into a shredding machine. When caught she acts surprised as if she had no clue it is inappropriate to eat couches or any other object. I use mouse traps to teach the dogs to stay off the furniture. I remember many years ago Shattab (Echo's grandmother and Merlin's mother) and her two puppies Jesse and Merlin were all in the living room together. The puppies tried to get up on the couch and the mouse traps startled them so they ran screaming from the room. Shattab watched them and as I later reset them I caught her pushing the cushion with her nose to set off the trap-and then climbed up on the couch. Her granddaughter Echo however eats the darn things!! 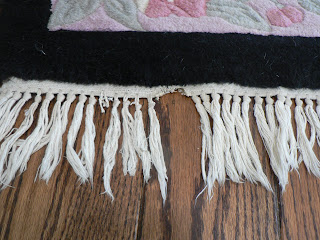 Mouse trap-training aid to keep the dogs off the furniture 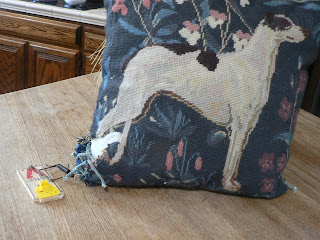 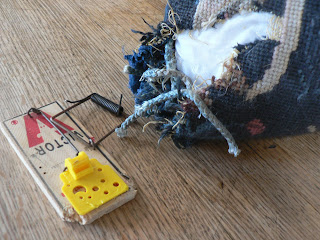 Couch cushions-the piping around the cushions have been nibbled

Lounge whip(training toy) that one she got when in an xpen,she worked until she pulled it in then ate it in half

Kong (empty no treats inside)

Redwood tree bark, she goes out and peels it off the tree

eggshell foam pad under the dog beds in the car

part of the couch 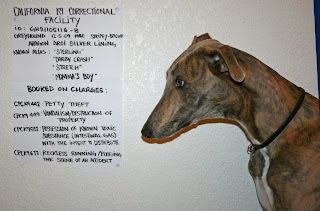 He hasn't completely destroyed anything. But he has 'creatively altered' one antique ammunition box and a table top wine barrel-slat candle holder. Wood is his preferred chew, apparently. I've caught him toting around my clothes, but he doesn't chew them, he arranges them on a dog bed and then lays on them. To his credit, I've invested a small fortune in 'authorized chew things' (as Helen will roll her eyes and verify) so he really is pretty overloaded with stuff to keep him busy. But I'm guessing the root of it is that he really is an angel. ;) He did, unfortunately, inherit his mothers talent for table surfing. Fortunately he inherited an unusually active conscience (most definitely not from his mother because she has none) and reliably doesn't follow through with his 'steals'. Items dropped in a wave of guilt:

1 plate of assorted cheeses ( plate was dropped face up, unharmed)

He also has a habit of nabbing items off shelves in the shops we visit. We have yet to be guilted into purchasing any of his selections:

2 handcrafted knit scarves, one uglier than the other

He doesn't damage the stuff he plucks from the shelves, he just hold it and nudges me with it eventually. Or presents it to the shop owner (yes, he did).

He'd make a terrible crook. He'd roll over so fast on the others. 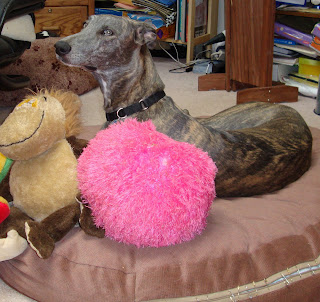 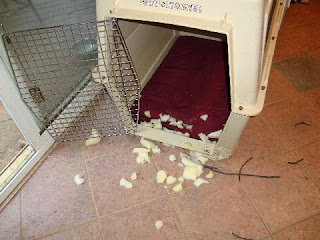 Goes under 1 1/2 ft area under chair - over rail on bottom and crawls through to other side and gets pee pad I use for Bug - then crawls back through and shreds pee pad all over kitchen. - done numerous times

Chews off nose and ears on toys - other toys just pulls apart but can be sewn back together. 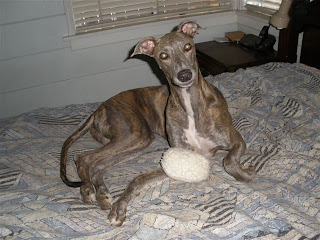 Too many toys to count--either ripped a hole in them, tore off "parts" or destroyed the squeakers

Total ripped out zippers in 2 dog beds. Great fun running around the yard with them hanging from her mouth.

Plum tree (it is still living tho--just no lower branches)

Still working on one of the blankets in her crate

Made some teeth "dents" in corner of dresser and nightstand

Picnic table bench that now has rounded corners. The benches and the table now have an x-pen around them as she jumped up on the table and was peering in my living room window.

Ate hole in carpet of friend that I was visiting. Fortunately it was a small hole, and I still have my friend. J She is a "dog friendly" person. 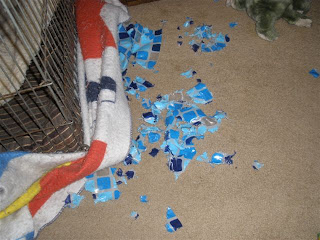 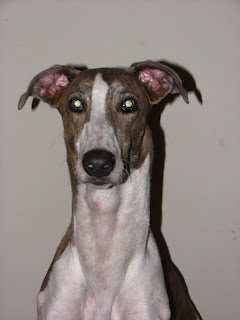 Tanner is a relative angel compared to his siblings. Perhaps partly due to the fact that we moved into a new house when he came home to live with us. Instead of having to puppy-proof the house, we just left most of our stuff packed up and out of the room. However, he has managed to get his teeth on a few things:

Foam from a dog bed