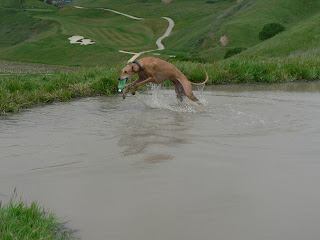 I am pleased to announce that the Aragongreyhounds blog was recently mentioned in the magazine "Celebrating Greyhounds". I am flattered that the blog was chosen to represent how smart, beautiful and talented greyhounds can be. 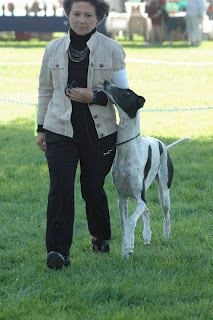 For new readers I, Helen, am the breeder of Aragon greyhounds. This blog, however, is actually written by several different people who each have a puppy from my last litter (Merlin X Lyric). Through reading our stories about training and competing with our hounds, we hope to provide motivation to readers. 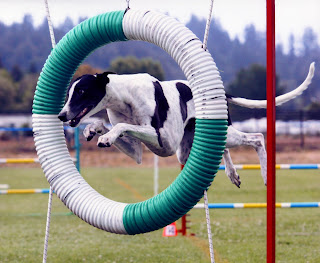 We all would love to see more greyhounds and their owners enjoying the competitive sports! 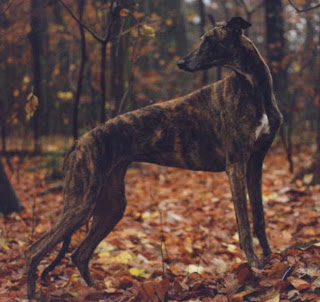 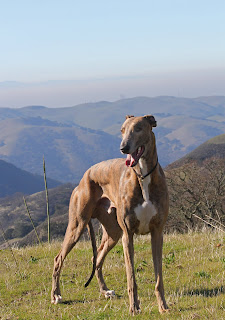 I knew Darby Crash was special from the very start, but I never imagined he'd take something that had been so difficult and not a lot of fun for me and turn it inside out and upside down. Showing in conformation had never been fun until, it was just work and nerves, until I met Darby. The first show he and I went to was about a week after Georgianna gave him to me, he had just turned 6 months and was barely trained to stack. He got a 3 point major that weekend, the judge said it was his exceptional movement. That was the first of many times I would hear that from a judge. When he was 14 months old, we took a chance and drove to 1,400 miles to Ft. Worth Texas for the Greyhound Club of America's Southern Specialty. I was told not to expect much, the competition would be big, perhaps a little out of our league. He finished his Championship at that Specialty, I guess we weren't so far out of our league after all. 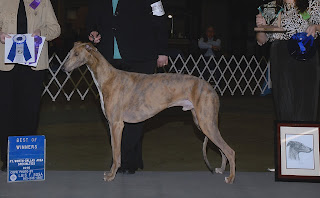 Now what? We were working on obedience, but as far as conformation goes, we were finished. He finished his Championship with 16 points, 3 major wins in 7 shows. Although impressive, it was a little disappointing; showing was getting to be fun, and Darby was still maturing and getting nicer and nicer looking by the month. When asked if I was going to 'special' him, the answer was an immediate "YES!". Of course, it would be a shame not to. Specialing a dog is not for everyone; it's expensive, time consuming and can be extremely political. Many people who decide to special a dog go with professional handlers and will heavily campaign a dog with advertisements in breed magazines. And for what? To garner a placement in the top 20 dogs in the country and secure invitations to exclusive shows: the Eukanuba Invitational, Westminster and on the International level, Crufts. Basically, to gain top recognition within the breed. Our goal was slightly less lofty; I wanted him in the top 20. I wanted an invite to the Eukanuba as this is the last year it would be held here in California (it's moving to Florida henceforth). In addition, the AKC had created a new title for Champions of Record this year; Grand Champion; I knew he could do that. And what's more? I knew he could do that with ME; no professional handlers, no big advertising, no selectively showing only to judges we were certain would place him. You know, we do it the hard way!
Here's how it works:

In conformation competition a hound is awarded points towards his or her 'Championship' title by winning in what are called 'Regular Classes'. Points are awarded based on how many other dogs are defeated in the class. Points are classified as minor points (1-2 points each win) or major points (3-5 points each win). A hound is 'Finished' when they reach 15 points total, with at least 2 'majors' under 2 different judges. The minimum age to start competing is 6 months old, all dogs start out with 0 points, of course.
For a 'Grand Championship' title, finished Champions of Record compete at the Specials level (Best of Breed competition only) and are awarded Grand Championship points by winning Best of Breed, Best of Opposite Sex or by being awarded 'Select Dog' or 'Select Bitch' points by the judge at each show. Each Champion of Records starts with 0 Grand Champion points and gains the title after being awarded 25 points with at least 3 majors under 3 different judges. Calculating these points requires a degree in higher math, and I firmly believe the formulas invented to decide how to calculate the points was invented by some bored idiot savant.

So we began anew in April, showing in Best of Breed, owner handled always. We didn't show excessively; one or two shows a month, sometimes more, sometimes less. In the the process, we worked our way up the standings. By the time invitations for the Eukanuba came out, we were #15 in the top 25. We were IN! 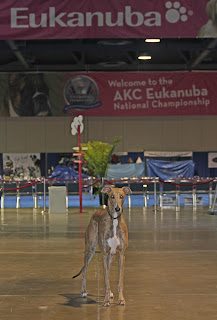 We went to the Eukanuba Invitational in Long Beach, California in December. 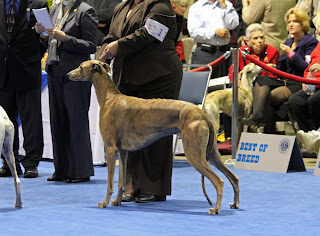 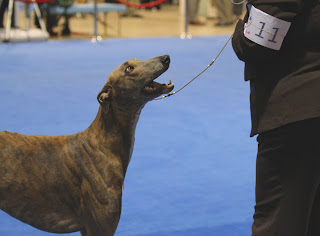 Darby showed very well, got to see Donna and Georgianna (who came to cheer him on!) and although we didn't place, we got to hang out with a lot of really neat people and hunker down in the 'Meet the Breed' booth when we weren't showing. The show will be aired on ABC this Sunday, January 23rd. Keep your eye out for Darby Crash, he was schmoozing with EVERYONE, cameramen included and may show up in the 'Meet the Breed' interviews. Sort of a "Where's Waldo" to get you to watch the dog show! Except this is "Where's Darby Crash?" We had a really good time, although I can say I won't be traveling to Florida to do it again!
In our last planned long show weekend, we traveled to Palm Springs to show at the Inland Empire/Palm Springs Kennel Club hound special. We got our last needed Select point and two Rally Advanced legs!
Our little Darby Crash is now GCh Ch Aragon Aroi Silver Lining RN. As of October, 2010 there were only 6 Grand Champion Greyhounds in the country (none with any obedience titling), Darby is now amongst them! Stick a fork in us, we are DONE. We plan on taking some well deserved time away from conformation so the baby boy can grow up a little. He finished his Grand Championship less than a year from starting it at the tender age of only 2 years, with 4 majors under 12 judges. Now we let him grow up. We'll work on our obedience, finish rally and start regular obedience competition. In addition to fetching a lot of sticks 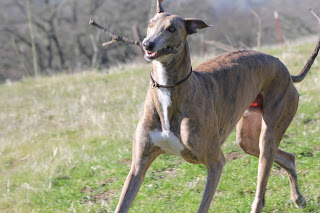 Digging a bunch of gophers 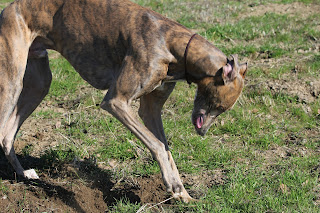 and mastering control over his ears 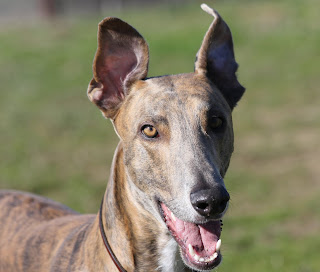 I think his Merlin is showing.
Posted by Aragon greyhounds at 6:39 PM 7 comments: 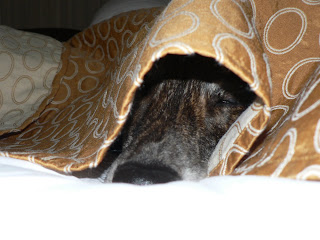 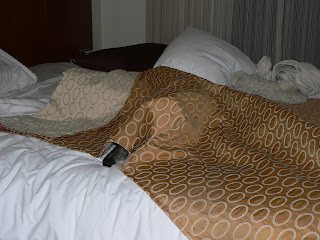 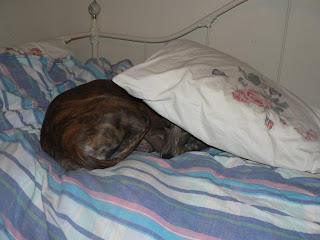 As told by Donna-For quite a while now when Becca is lying on the bed next to me, she FIRMLY and repeatedly pushes her muzzle at the covers in my direction, like a dog does when it's trying to bury its food. Is she trying to push me out of the bed so she can have it all to herself?" I finally realized what she is asking is for me to cover her with a pillow. Strange! 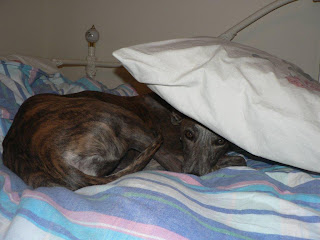 In addition to obedience and tracking last weekend we also competed in a three agility trial. What a fun but exhausting weekend. Whisper earned another QQ-her 12th and fastest time to date in Jumpers-5.72 yds per second.

She enjoys agility as much or more than any other sport we compete in. Her tail never stops moving. Her weavepole entrances are super and I am finally learning to trust her to find and enter correctly as seen in the Standard run.

I think I am also finally learning to handle from a distance. What a blast to send her out to an obstacle, trust she will take it and cut to the next one to be ready when she comes in. 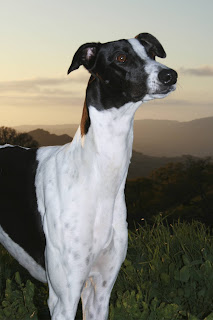 Although I enjoy showing my dogs in conformation I love training them in performance sports-tracking,obedience,rally and agility. Years ago my greyhound Spirit was the second greyhound to ever earn the VCD1 title. A VCD1 requires a CD,TD,NA(P) and NAJ(P). No greyhound had earned a VCD2 title-CDX,TD,OA(P),OAJ(OJP) and I had hoped Spirit would take me there. Unfortunately age caught up with her before she earned the last title an OAP so she never made it.

Her niece Whisper made it Dec 30 2010 and became the first greyhound to title to that level. She earned her third CDX leg in the below video despite the fact she rarely if ever trains indoors. I was so proud of her-you can tell she is getting insecure around the figure eight exercise but hung in there to earn a 194.5, third place in a class of 18 and her CDX title. She is now Ch Aragon Lunar Eclipse VCD2 MX MXJ RE JC.

This past weekend was a busy dog show weekend. Between obedience with Whisper for her third leg CDX leg, a three day agility trial and certifying Echo for a tracking trial, I was exhausted by the end of the weekend.

To enter a tracking trial a dog needs to be certified,that is run a TD track under a recognized tracking judge. There are few trials for the number of dogs ready so a certification track proves that the dog is actually ready to enter a trial. I met tracking judge and greyhound breeder Gail Burnham of Suntiger greyhounds at the end of the first day of agility. She laid a 1/2 hour old track with 4 turns to test Echo. It was lovely tracking conditions, rain the night before, cool weather, no wind and moderate grass cover. Because of technical errors the video starts about half way through Echo's track. She had already made two turns before the video starts. Sorry for the video quality. It was hard to walk and video at the same time.