As mentioned in the previous email, Whisper had a terrific agility weekend. This was her first time running agility four days in a row.

Here is her Excellent Standard run from Oct 17.

Here is her Excellent Standard run from Oct 19.

Whisper really is a phenomenal dog to work with. She is also a lot of fun to watch!

The four west coast puppies got together at the Greyhound Club of Northern California specialty at the Del Valle shows last weekend.

The best part of dog showing is getting together with friends. This year, Helen's house was Greyhound Headquarters / Grand Central Station! At one point there were 10 dogs and 13 people eating delicious indian food cooked by Sheryl Bartel of Helios Hounds (http://www.heliosgreyhounds.com) in the house. We also enjoyed the company of Jennifer Bachelor of Never Say Never Greyhounds (www.neversaynevergreyhounds.net) and her friend Anna as well as new greyhound friend Karen and Toby (Chaparral Toblerone). 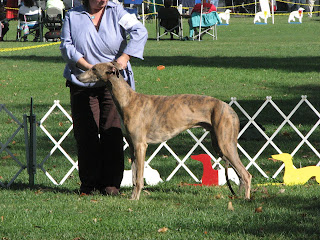 At the specialty on Saturday, Echo won Best in Sweeps and Darby won Best Opposite! Lyric also won an Award of Merit! We are very pleased with their performance. Tanner was unimpressed with the specialty and showed it by taking a very long pee break in the ring. All four puppies had a grand time in the ring and out visiting people and dogs. 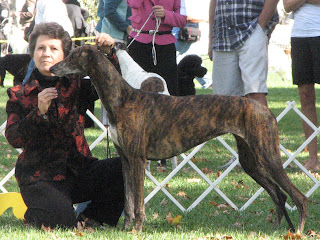 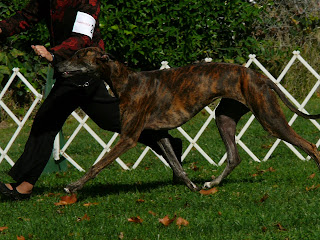 The specialty was Andretti and Lisa's debut in Open A obedience. They did remarkably well but unfortunately did not qualify. Andretti did not see the point of the drop on recall and instead came swiftly to Lisa. 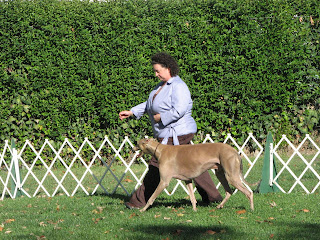 On Sunday, Tanner redeemed himself and won Winners Dog and Best of Winners for a 4 point major! This is his second major and we are very excited to have it out of the way. Lyric decided not to let her kids out shine her and won the breed. 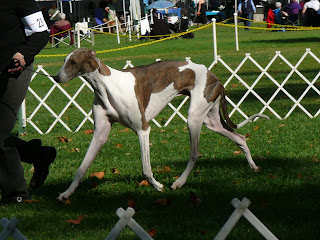 Monday was a winding down day as lots of our fellow greyhound exhibitors headed home and didn't show. Tanner was among them. Darby went reserve winners dog and Lyric once again won the breed. However, winning the breed wasn't enough for Lyric and she went on to win a Group 4! 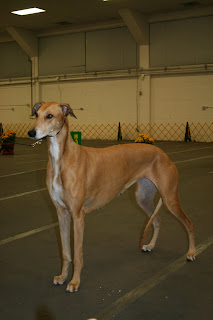 During the down time puppies played and practiced obedience. Becca is the most advanced in obedience as she recently graduated 4th in her all breed competitive obedience class and is now in a more advanced class. 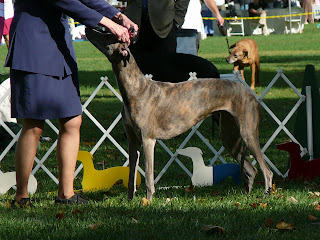 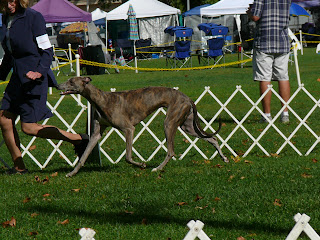 Not to be out done by her house mates, Whisper had a great weekend in agility. On Friday she earned her first Double-Q! When the weekend was over, she had an additional 37 MACH points. Videos to be posted later. She had a great time and would have earned more points except for some silly handler handler hours and slight miscalculations. 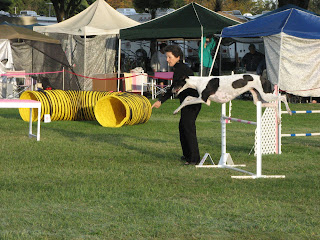 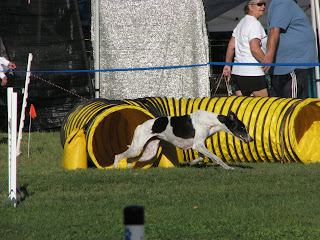 Here is the win photo from Becca's first point! 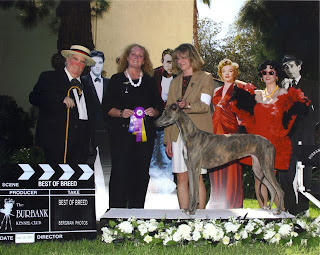 Our last agility trial was HOT. We started a new plan of action to calm Whisper down. Warm up starting the night before with a 1 1/2 mile bike ride followed by another 1+ mile walk. The day of the show we went got there early and went to the back "40" and let her off leash to run her hearts
content. It was quickly getting hot though so she didn't run as much as normal. Right before her jumpers run we jogged around the show grounds. By now it was probably pushing 95-100 degrees. Her jumpers run was very good but we missed the weave pole entrance-oh well. Then onto standard a couple of hours later. You can see in the video how much she was panting but she did quite well and earned a second place for 16 more MACH points. She is an unusual greyhound in that she performs well in heat.

In between runs I walked Echo separately from the others and worked on her attention to me and getting used to lots of commotion. She met a cute littlev17 wk old Boston-Dexter and spent some time playing with him. The play style was different than with her own breed. She would lay down and try to squash him. He loved it.

The next day was as hot if not hotter than the previous day. The standard run was an NQ-a table fault and handling error kept us from Qing. Her jumpers run though was excellent and she earned a second place for 6 more MACH points. All told we are up to 40-but no Double Quals yet. Hopefully we are close to those as well.

The extra exercise prior to the trial seemed to work. It seems counter intuitive to wear your dog before you run. However, Whisper is not your normal dog! She gets so amped up that she seems to have trouble focusing, she just wants to go-go-go. The plan seemed to work this weekend. She still had the speed and quickness but also seemed to have more focus and attention to direction.
Posted by Tarmar at 7:18 PM 3 comments: