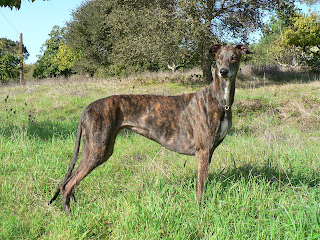 The Greyhound Club of Northern California has a fall specialty every year in conjunction with Del Valle Kennel Club shows. Although a smaller entry than the Eastern or Western Specialty it still has   a fairly large entry of greyhounds. This year we had 27 entered in the classes, sweeps and obedience. 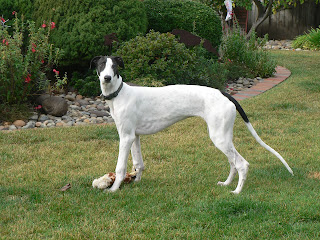 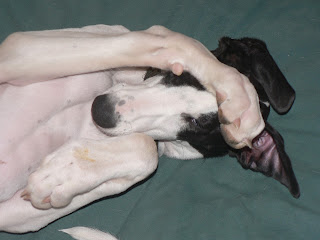 The following day Breeze again went Winners Bitch, Best of Winners and Best of Breed to finish her Breed Championship.

Meanwhile over in agility Whisper and I Qed in Jumpers all three days but did not Q in Standard. We need 4 more QQ for her MACH2. So it was fun running but we don't need the points.

A fun but exhausting weekend.

I spend a lot of time in the evening training the dogs and weekend competing or trialing. The dogs have a busy life but what do they do during the day when I am at work. Most days they go to work with me and sleep the day away. 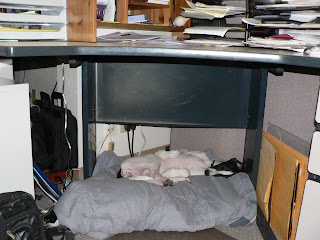 As I have my own clinic it is easy to bring the dogs into work. They get exposed to a lot of new situations early on in their life. New dogs, new smells ,new people and at times lots of chaos.I think they learn to deal with new situations quite easily. I hear people talk about how difficult it is to travel with their greyhound(s), they stop eating, pant, pace etc. I have rarely experienced any problems traveling with my dogs and I think it is because of their early upbringing. 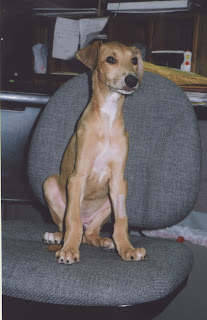 It can be a long day for puppies so I try to break up the day with play times. Lyric and Whisper grew up with a best friend Joey the Boston Terrier. During lunch, slow times in the clinic or just before going home the dogs would play. 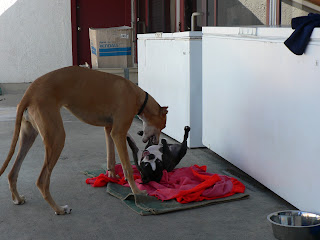 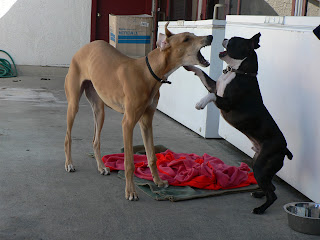 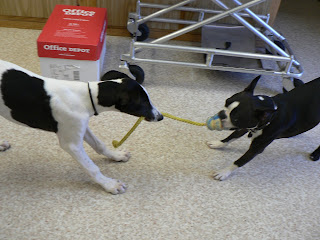 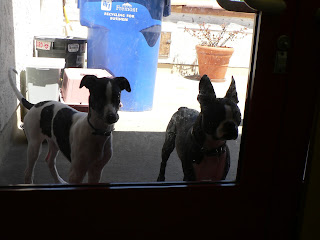 To this day Lyric and Whisper love Boston Terriers. Unfortunately Joey  moved away before Echo and Breeze  arrived and needed a playmate. 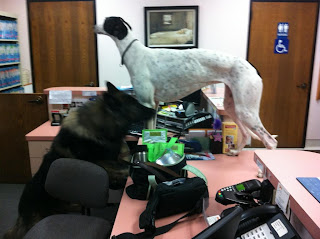 Breeze took matters into her own paws by meeting a new friend. Since Pedro was behind the desk she jumped on the counter to meet him, Breeze is a true agility dog in the making. 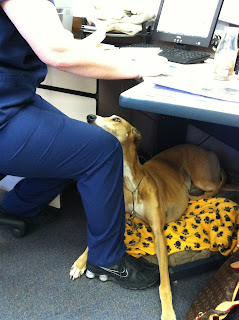 When the day gets too long, asking for a little pat on the head passes the time.

In addition to dog shows, dog training and dog sports I also love to garden. To me nothing is more peaceful than walking out in my garden and watching the birds flying around the plants. Recently I have also noticed my garden is attracting butterflies as well. 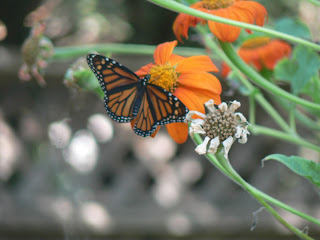 A Monarch on a Tithonia plant 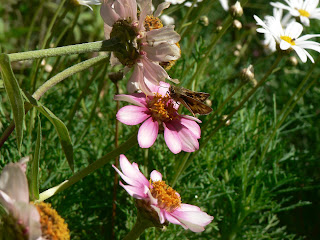 A Skipper on a Zinnia 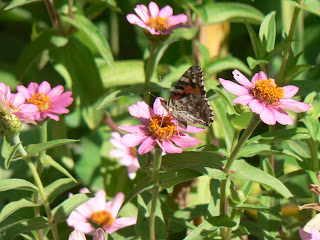 A Painted Lady on a Zinnia again.

I have also notice Cabbage Whites and Hare Streaks flying around the flower garden but have been unable to capture them in a photo.