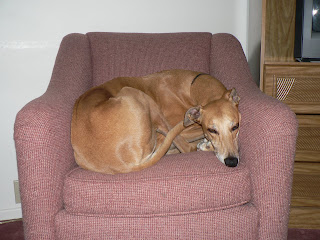 Lyric has disliked agility since she got injured in a tunnel years ago. Despite everything I have tried she remained indifferent to running agility again. Last year she earned two legs on her Open Jumpers then remembered she disliked agility and tried to leave the ring on her next attempt. So I quit and kept working with Whisper and Echo. Lyric watched them train for months. Although she and I have been working mostly on Open obedience she has been asked to do a few agility jumps. She has seemed willing and eager for her training time. I decided to enter her again this past weekend in agility and see if she was willing to try again. Realizing we haven't run an entire agility sequence in close to a year I didn't have a lot of hope of qualifying, I just wanted to see where she was mentally. Not only did she easily qualify, she won her class, earned her title AND she was happy to be in the ring.
Video to follow 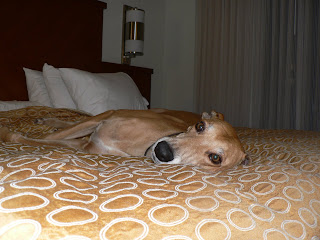 After Whisper's tendon injury she was laid off for a month. We did no agility or real exercise for four weeks. She was leash walked for one week before the agility trial Nov 14. We practiced agility together for the first time 3 days before the trial-and at a lowered jumped height. Needless to say I was nervous jumping her and my handling showed my indecision to push her too fast. Still in her qualifying standard run she was 21 seconds under course time so we weren't that slow.

Although we only qualified one run-the standard run on Nov 14 it was fun being back in the ring again with her. Our jumpers run was a blast but unfortunately I couldn't call her off an incorrect jump. But she obviously was having fun again.

After the weekend she was tired and earned a well deserved rest. 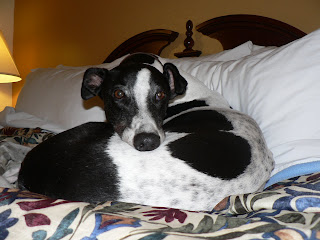 Over the past several months I have been borrowing another greyhound, Brego, a 5 year old red brindle male, to play with Becca. This was necessary because Shawn, her housemate, is a true greyhound couch potato playing but infrequently. I have become quite attached to Brego as his playfulness, inquisitiveness and temperament blended well into the household. It appeared he was becoming attached to me as well. 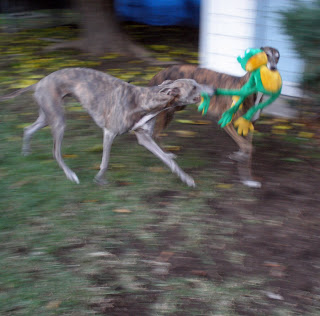 At some point I wondered if it would work to permanently add a third greyhound to the household. He is so sweet, affectionate and well behaved. It turns out Brego who had recently finished his breed championship was available to the right home. I was concerned whether both boys Shawn and Brego would live together peacefully. I shouldn't have worried as both boys ignore each other. In fact I think Shawn is relieved to have more couch time as Brego wears Becca out. They seem to play 24/7!

Becca’s Halloween Trick AND Treat (as told by Donna Arcaro)

I am a member of the Pasanita Obedience Club; since our annual obedience/rally trial was during the day on Halloween this year, that meant the members volunteered to do various tasks to get ready for the trial. I volunteered to help with the set up in the park which began at 6:00 AM. I also entered Becca in Rally Advanced and Beginner Novice obedience. When my alarm went off at 4:00 AM that morning, Becca never even pulled her head out from under the pillows to see what was gong on—this is a position she likes to sleep in when she’s very tired. I also felt like putting MY head under the pillow and going back to sleep!! Nevertheless, we got packed up and arrived at the park at about 5:45 AM. We had a great turnout of Club member helpers so we were ready in plenty of time before the trial started; the weather was absolute perfect. The trial started with one of our members singing the National Anthem—she does a most moving rendition that can bring people to tears. 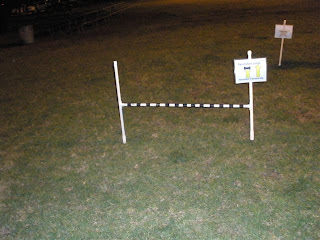 We entered the Rally Ring for our attempt at her 2nd qualifying score in Rally Advanced, and things were going pretty well, despite Becca being off leash. However, when we got to the 5th sign which was the bar jump, she sailed over it and continued to sail out of the ring, running flat out as only a Greyhound can run, doing “zoomies” by the ring, with a big smile on her face, fully enjoying her experience. I was in shock as she’s never before even looked like she would run out of a rally ring. If nothing else, some of the spectators were amazed and entertained to see exactly how fast and powerful a Greyhound can actually run. When she started heading back to me, I said “Becca, here” and she came right to me in the ring. The judge said he was sorry and I said the same. Oh well, we brought the entertainment of the day, but obviously that was the end of rally for us that day. More training ahead for both of us!! 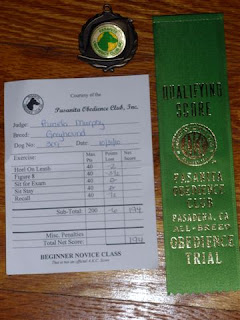 Many hours later our number was up for entering the Beginner Novice ring which consists of rally and basic obedience. Becca’s “treat” was getting her 3rd Beginner Novice leg, completing her title, with a score of 194 out of a possible 200—I can now add “BN” after her registered name. Yippee!! She’s the first Greyhound in our Club with this title and I believe the first Club member to earn this title since this titling class became effective for competition in July of this year. I was most proud of her!!

So that’s how we spent Halloween—trick AND treat from Becca to me.
Posted by Aragon greyhounds at 9:26 PM 1 comment:

There is a new trend in dog sports and fitness called canine conditioning. It takes all the information we know about human core conditioning as well as yoga and pilates techniques and adapts them for four legs.

One of the first steps you would learn from a canine conditioning coach is to teach your dog a command for "feet up" or to put their front feet on something that you indicate. There is a lot you can do once you get this behavior.

The thing that I am the most interested in is to teach Tanner how to use his back end to maximum effect. At not quite two years old, he tends to be a big goober at times. I think if he is properly conditioned and body-wise, he will be less likely to hurt himself or someone else. Plus, I am a bit of a training geek and wanted to try teaching this behavior.

I didn't get every training session videoed but hopefully enough that you can see the progress.

Here is one of our first sessions. I apologize for cutting off his head (this is what I get when I put the camera on the floor). At least you can see his feet. My criteria at this step was one foot touching the object. I try to give him his treat when his foot is still on the target. This video is a little long about two minutes but you can get the gist of it rather quickly.

Tanner is consistently giving me one foot on the target. My criteria is still to click for one foot but I am feeding him extra for two feet. We also had an issue where he wanted to lay down on the target. I don't know if this is because I had previously taught him to lay down on a different target or because he is lazy. Either way, it is just behavior and can be molded. I give him his treats up, in other words I hold the treat in such a way that he has to stretch up a little bit to get it. I also do not click for laying down on the object and instead ask him to do something else to move him off the target to reset.

In this next video, Tanner is really getting good at Stomp. I haven't added the cue yet. This session took place during a break a training seminar. I was pretty impressed that he was so eager to perform even with the distractions. From this session I can see that the behavior is where I want it to be and we are ready for the cue.


Here we practice with the cue "Stomp".

Now that he has the behavior on cue I switch it up and ask him to "Stomp" a stool. I click for one foot up the first time or two to get him going.

On to bigger and better things! We were taking part in a small canine conditioning class and Tanner got to try out his new behavior on some equipment. The squishy disc reminds me of a Bosu ball. When Tanner gets both of his front feet on it, he has to work to keep everything steady. Because he has such a good reward history with stable things and this behavior, he has no problem trusting me and attempting to do this.

Now he gets to try the peanut ball. This ball is easier than a plain round one because it can only roll in two directions instead of 360 degrees. Eventually, if we work at it, we will work up to the round ball without my need to stabilize it.

What a good boy!

Many of these videos were made at My Dog's Gym in Salem, Oregon and the rest were made in my messy living room.
Posted by Tarmar at 9:45 AM 5 comments:

Obedience seems so much harder than agility to keep a dog happy and motivated to work. At least in agility the dogs are running and as long as they perform the next obstacle correctly it doesn't matter how they get it done. In obedience it is much more detail oriented. For instance on a recall not only must they come to you briskly, they also must do a correct front and finish. Points are deducted for each little mistake even if the exercise is performed correctly. To teach all of these components and not be demotivating can be a challenge. On a recall if a dog comes in very quickly(good)and does a straight front(good) but does an automatic perfect finish(bad) points are deducted. To correct a dog for this mistake can make a dog not want to come in quickly or give a perfect front. Training for obedience has to be very creative to get what you want with a happy fast working dog.

Whisper is probably the best working greyhound I have ever trained.
We entered the obedience portion of Greyhound Club of Northern California specialty and Whisper earned her second Open leg with a 194 and High In Trial.

Now to try to find our third leg-and title.
Posted by Aragon greyhounds at 1:29 PM 8 comments: