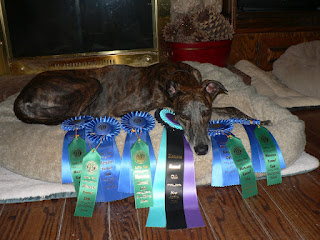 Last weekend was a three day agility trial and Echo made her debut in Open. Although still alittle unconfident in agility she is getting more into the game. Her first run was Open Jumpers, she took an extra jump and got a wrong course but otherwise was perfect. Since Echo doesn't like jumps after her crash/injury last year I would much rather she offer to take an extra jump than duck out of a jump. She was happy and relaxed coming off the courses.
The second and third day she qualified in Open Jumpers with a first place.

She qualified all three days in standard and earned her OA with all first places. I didn't realize we had a problem with the chute until she went through it and immediately slowed down. By the last day we got a refusal(our only one of the weekend) but she went in when asked again. She had no problem with the chute in Novice so I am alittle puzzled by her response in Open. But I think it should be an easy fix with practic and lots of rewards at the end.

After the fire alarm at 3 AM we got up at 4:30 to get to the show grounds early to get set up and to calm down. The 24 inch dogs were running first.

First run of the day was a Standard warm up round. Nancy Gyes our instructor told us before we ran to practice our weak points(contacts) and don't do any unusual handling as it may shake confidence if the dog doesn't do what you want or expect.
So as expected Whisper didn't hold her contact and her "correction" was not to be able to continue to run. As you can see in the video she held her later contacts perfectly.

As soon as I started running Whisper it felt so normal and good I stopped being nervous then and for the rest of the weekend. She did front crosses and rear crosses like she always does, I felt like we were in sync. Time 2 Beat was later in the day and except for a slight bobble at the fourth jump went well. Again a confidence building round.

The following day was the competition with 2 out of 3 of the runs- the Jumpers and Standard runs. The Hybrid run was the next day.

Fun easy courses with no mistakes. The last day was the hybrid class and the most challenging of the courses. The opening was the tricky part, the rest was easy.

We didn't make it to the finals but came close. We were 9th out of 86 dogs competing. She gots tons of compliments and applause, in fact she could have been the crowd favorite. Vendors told me she was their favorite dog to watch never having seen a greyhound compete in agility before.
All in all a fun experience. My only regret was Whisper was in false pregnancy so not quite as amped and fast as normal. But what she lacked in speed she made up for in accuracy.
Posted by Aragon greyhounds at 5:03 PM 2 comments:

Whisper is only the second greyhound to have been invited to the AKC Nationals in agility. To qualify a dog must have earned 600 MACH points and 6 QQ the preceding year. So only the top agility dogs in the country were invited. Since the Nationals were held so close to home-Reno Nevada this year it was a given to go.

A friend of mine Kathy and her Golden retriever Jade made the trip with us for moral support. It was in 60s and sunny when we left. The bay area rarely/never gets snow so along the way we stopped at Donner Pass in the Sierras to let the dogs play in the snow. 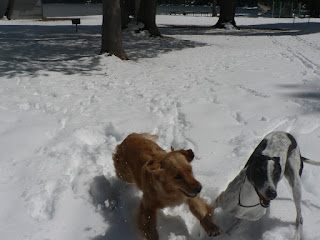 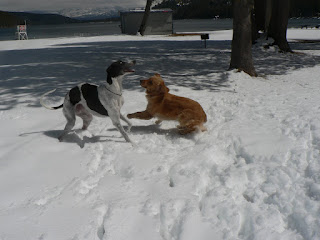 Five hours later we made it to Reno. People were arriving from all around the country including Hawaii. The car below had just arrived from Pennsylvannia. 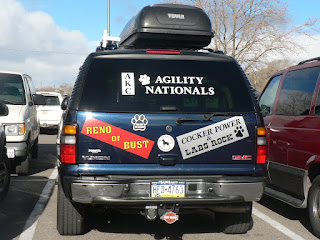 Checking into the trial the day before the event started we parked next to a car from West Virginia. In the car was a Border Collie and a tumbleweed. Asking the owner what was up with the tumbleweed he answered with a drawl "he caught it in Colorado and was taking it home."

After completing check in at the trial site we headed to the hotel to check in and get a good nights sleep before the competition started. 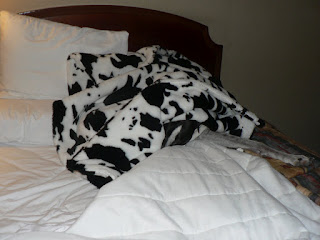 All went well until 3 AM when the fire alarms went off. The upper floors of the hotel were evacuated(of course we were on the 8th floor) until the fire department cleared the scene. Someone on the floor above was smoking in the hall and tripped the smoke alarm. It was cold, it was more than cold it was frigid cold and windy. Forty minutes later we were allowed back into the hotel. So at 3:40 AM we tried to go back to sleep only to have the alarm go off at 4:30 AM.

From the hotel to the show grounds Reno Livestock Event Center was close. When the sun rose the hills were covered in snow and cold. 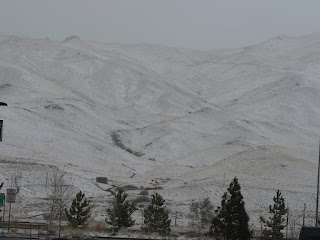 At least the trial was indoors so somewhat warmer. 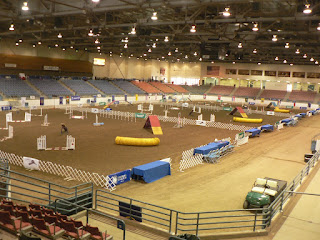 Whisper at the Agility Nationals

Whisper and Helen competed at the AKC National Agility Championships this weekend.  The event isn't quite over but we wanted to report that they placed 9th out of 86 dogs!  They competed against some very, very good dogs and ended up beating many representatives of the more traditional breeds.

The whole event was quite a rush and as you can imagine, the two of them are quite exhausted.

They will give us a full report when they return home next week and catch up on some sleep. 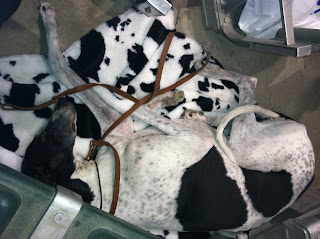